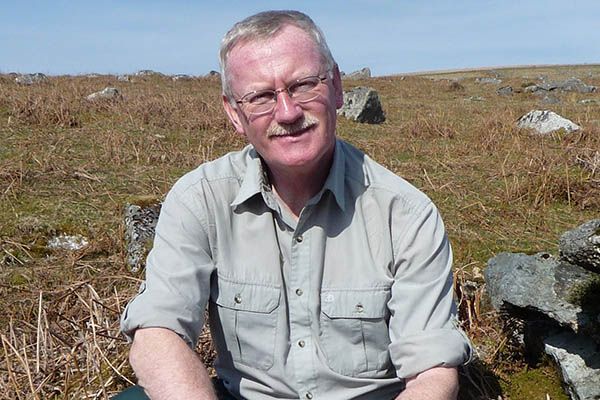 Simon Dell is currently the Director and Co-ordinator of Moorland Guides. He has since retired as a full-time and volunteer Police Constable after thirty two years regular service in September 2007, and since then as a Special Constable volunteer in the Devon and Cornwall Constabulary having been a member of the Force since 1975. His last post was leading the Special Constabulary volunteers throughout the Force area in supporting the work of the Wildlife Crime Officers, thus continuing the work when he was, for many years, a Wildlife Liaison Officer in the Police Service . He served in various stations throughout the counties of Devon and Cornwall as well as working on the Isles of Scilly. Seventeen years of his service was spent at Tavistock Police Station as Community Constable, where, in 1997 he was awarded the MBE for services to the community as well as Mountain Rescue.
His interests have involved twenty years as a member of the Dartmoor Rescue Group, being its chairman in 1995 and is also a Dartmoor National Park Guide. He leads guided walks on Lundy Island and is a member of the Lundy Field Society having written several books about the island including a guide. His guided walks now also include guiding on the Pembrokeshire island of Skomer during the puffin season.
In 1997 his first book, ‘The Beat on Western Dartmoor’ was published and following the success of this first book (it has since sold out!) he has been much in demand for talks and presentations all around the Force area as well as nationally. He has appeared on television and radio talking about policing history and has completed two series of the television documentary series ‘Murder Most Foul’ with the actor Jack Shepherd.
He was for many years a member of the National committee of the Police History Society as well as being a member of the local Devon & Cornwall Police Museum Committee.
Simon has received the Queen’s Commendation for Bravery in 2003 and shortly after, he received the Daily Mirror’s ‘Pride of Britain’ Award and also the “Sun” newspaper’s Police Bravery Award 2002. In 2009 he was awarded the “Anne Frank Educator’s Award” for his work with young people who suffer discrimination, this award was presented by Anne Frank’s posthumous-step-sister. In 2013 he was awarded the Lifetime In Policing Award by the Home Office after serving through five different decades in the Force as both a Regular full-time Officer and a volunteer Special Constable.
He is now a freelance writer having published fourteen books on policing as well as Dartmoor Prison, industrial archaeology and Lundy Island. He also writes for various Dartmoor magazines and periodicals as well as the Times Educational Supplement and more recently the BBC Countryfile Magazine. He has a regular feature called “Dartmoor Curiosities” in the Dartmoor Magazine. Simon’s books can be obtained from this website at the Books for Sale page. He has also been involved in reviewing Oxford University publications. His books can be found for purchase on his website at http://simondell.co.uk/book-shop/
He still lives in Tavistock with his wife Shirley, son Matthew & daughter Laura along with grandchildren Maddison and Joseph. In his spare time he enjoys relaxing mountaineering both in the UK as well as the Alps and Himalayas, having taken part in several expeditions in Nepal and Tibet to both the north and south sides of Mount Everest and to the summit of nearby Kalar Pathar as well as climbing in the Alps and summating Mont Blanc.
When not found on Dartmoor or up a mountain he can be found playing in the South Wales Police Band of which he is a member.

This website uses cookies to improve your experience while you navigate through the website. Out of these, the cookies that are categorized as necessary are stored on your browser as they are essential for the working of basic functionalities of the website. We also use third-party cookies that help us analyze and understand how you use this website. These cookies will be stored in your browser only with your consent. You also have the option to opt-out of these cookies. But opting out of some of these cookies may affect your browsing experience.
Necessary Always Enabled
Necessary cookies are absolutely essential for the website to function properly. This category only includes cookies that ensures basic functionalities and security features of the website. These cookies do not store any personal information.
Non-necessary
Any cookies that may not be particularly necessary for the website to function and is used specifically to collect user personal data via analytics, ads, other embedded contents are termed as non-necessary cookies. It is mandatory to procure user consent prior to running these cookies on your website.
SAVE & ACCEPT