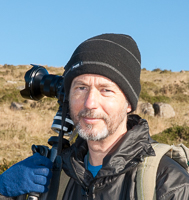 Nigel Grist is a biologist by training specialising at university in moorland ecology and marine studies. A further research period was spent on the growth of seabird colonies. His interest in flora, especially moorland plants and some of the non-flowering groups such as mosses, liverworts and lichens has been maintained; Dartmoor is a terrific place for these groups.

For twenty-five years he was joint owner and co-director of a marine biological survey company specialising in surveys of marine invertebrates as well as in the design and programming of a number of scientific databases. Photography has been important for both work and pleasure for 40+ years and he has worked and printed in both film and digital. For the last five years he has been developing his photography and other artistic ventures including printmaking (especially linocuts and etchings) though exhibitions, and he has an online presence and links with online image agencies. (www.theunseenview.com)

His interests are varied but might be grouped under wildlife and landscape in a very broad sense: very keen on the detail of macro images but also in trying to capture some sense of a landscape. Dartmoor and the moor’s multi-layered complexity has figured prominently in recent years and he walks there frequently; the Bronze Age sites being of particular interest. Over eleven months between July 2013 and May 2014 he walked all of the named tors and hills on the moor; 1200km and 370 targets in total.

Nigel holds the Mountain Training Association’s WGL award and Bronze and Silver NNAS certificates. He greatly enjoys showing others some of the huge variety of sites and scenes the moor has to offer. He is also very keen on navigation as an enjoyable pursuit for its own sake and enjoys taking small groups on training walks.